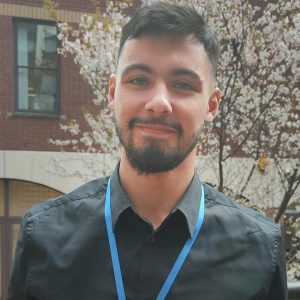 When Craig finished his GCSEs, he had little idea about what he wanted to do next. He knew he needed to learn a skill, but he wanted more support than he would get at a college as he struggles to focus in a classroom. He found English and Maths challenging, so his initial ideas about completing an Apprenticeship with cyber-security employer Vasave did not work out. He also found his ideas changing and says, “I noticed that I was finding it more interesting talking to other people and I was better at talking to people than being on a computer.” Vasave suggested he approach London Learning Consortium (LLC) in Croydon, and after a discussion with an advisor there, Craig was referred onto a Traineeship.

Craig was immediately impressed with LLC. He says, “The people I was coming in contact with seemed more interested in me than most other places, even from the first conversation. It wasn’t as if I was just another number.” He discussed his goals for employment and agreed that he needed support with his functional skills, as well as vocational ones. He says, “I knew I wanted to get my English and maths sorted but mainly I wanted to do my digital skills because you need to have IT skills to get anywhere in an office workspace or anywhere.” He decided on a new focus to reflect his new interest – customer service.

Craig’s 3-month Traineeship programme included small classes covering Customer Service and Employability qualifications, separate classes for English, Maths and Digital Skills at Level 2, and a 3-week work placement. From the start, he made swift progress thanks to the one-to-one support he received. He says, “There is time for the teacher to see each individual and because the group isn’t large, you aren’t afraid to put your hand up and ask questions. All of the tutors are very supportive, and they made sure we were OK. They were constantly setting goals for me to achieve and checking to see if there was anything they could do to improve my experience.” Craig also gained CV writing, interview, and employability skills which he knows will be useful wherever he works in the future. He says, “It’s all very well learning to do a good interview but if you can’t get one, it’s pointless knowing that. You have to be consistent too. For example, I can say that I have attention to detail, but if my shirt isn’t ironed, this would say otherwise.”

Craig completed his work placement on the reception desk at LLC. It was a key element of the programme which allowed him to put his classroom learning into practice straight away. He says, “Without work experience, you don’t get your foot in the door. The Customer Service course started to really help as I was already putting those skills into use. It is useful to work and learn at the same time as that way you don’t lose the skills. It is like going to the gym. You lose it if you don’t use it.” He found that his experiences of real work taught him a different set of skills than he expected. He says, “The Traineeship has made me more confident. I know how to talk to customers now. You can’t just talk to them like your best mate!”

Craig has now finished his Traineeship with five new qualifications and has started a full-time job with LLC’s Sales and Recruitment team. He is excited by his new role and by the thought of his future. He says, “What’s best about LLC is that learning here, I’ve actually made progress. I’ve started something and got into a position where I didn’t think I would be originally. I didn’t realise that it would actually go this well. I had no idea that I was going to be offered a job here so that was really out of the blue. I’ve now got a good job and they say I’m surpassing expectations.”

For Craig, learning such a wide range of new skills has been vital. He says, “The biggest benefit is how all the skills I have learned are a huge part of the role that I’m now in. I don’t think I’d be able to do the role without the skills I’ve learned.” He is positive about the future and his employment options, saying, “If I didn’t want to be here for the rest of my life, I have gained a lot of valuable skills which I would be able to take with me.”

Craig also found that the Traineeship at LLC improved his life outside of learning and work. He says, “It’s helped me better myself and because of that I have a lot more freedom in my spare time and I have money to do things.” He has grown and changed as a person from having no idea of what to do with his future to someone with clearly focussed goals and an understanding of what his true value is. He says, “In general talking to people now, I know exactly what I’m going to say, rather than stumbling around trying to find the words. I’m a lot more productive even outside of work.”

Craig has already told some of his friends about his experiences and encouraged them to follow his footsteps. He says, “I’d recommend learning on a Traineeship at LLC because if you put in the hard work and have the support, you will get to where you want to be. If you went to college, you’d be there a whole year trying to get these qualifications and I was only at LLC for 3 months but gained everything I need. You move quicker and it’s not hard because of the support you get.”

In a short period of time, he has achieved his dream of getting a job and along the way has matured in his skills, his personal presentation and his confidence in dealing with a range of people. He is now on track for a successful career. As Craig says, “My future is looking bright – very bright.”

Click here for more information about Step to Employment Traineeship.

Join us on Social Media

For further support or career advice, please call us on 020 8774 4040 or email info@londonlc.org.uk or traineeship.info@londonlc.org.uk. Follow us on our social media channels to receive the latest information on our interview techniques and tips! 🙂

We use cookies on our website to give you the most relevant experience by remembering your preferences and repeat visits. By clicking “Accept All”, you consent to the use of ALL the cookies. However, you may visit "Cookie Settings" to provide a controlled consent. Read More
Cookie SettingsAccept All
Manage Cookies

This website uses cookies to improve your experience while you navigate through the website. Out of these, the cookies that are categorized as necessary are stored on your browser as they are essential for the working of basic functionalities of the website. We also use third-party cookies that help us analyze and understand how you use this website. These cookies will be stored in your browser only with your consent. You also have the option to opt-out of these cookies. But opting out of some of these cookies may affect your browsing experience.
Necessary Always Enabled
Necessary cookies are absolutely essential for the website to function properly. These cookies ensure basic functionalities and security features of the website, anonymously.
Functional
Functional cookies help to perform certain functionalities like sharing the content of the website on social media platforms, collect feedbacks, and other third-party features.
Performance
Performance cookies are used to understand and analyze the key performance indexes of the website which helps in delivering a better user experience for the visitors.
Analytics
Analytical cookies are used to understand how visitors interact with the website. These cookies help provide information on metrics the number of visitors, bounce rate, traffic source, etc.
Advertisement
Advertisement cookies are used to provide visitors with relevant ads and marketing campaigns. These cookies track visitors across websites and collect information to provide customized ads.
Others
Other uncategorized cookies are those that are being analyzed and have not been classified into a category as yet.
SAVE & ACCEPT
Powered by

All learners will/are being contacted to advise them to “stay at home” and “do not take risks” as a red weather warning was issued for London and the east of England ahead of the arrival of Storm Eunice.